“You’re going national!”
Those three words stuck with me following an in-person, sit-down interview with one of my favorite rappers of all time. Let’s be honest, I’ve had a crush on LL Cool J since I was about 10 years old. He was everything!

I remember the first time I interviewed him via satellite about his brand new TV show at the time, NCIS: LA.  Here I was, a grown woman, giddy, with clammy hands and probably sounding a bit like an airhead as I ran through a series of questions and gushed over the fact that I was talking to him, even though I could see him but he couldn’t see me. I never heard a word he said.  Poor Chris O’Donnell was sitting next to LL during that interview, and when the 5 minute window was up, I don’t think I asked Chris one question.

I had the chance to redeem myself during a future interview as LL was gearing up to host the Grammy Awards. I came prepared, with high energy and fun questions and when it was all over, he was rapping “Around the Way Girl” to me. He still didn’t know who the heck I was and never saw my face.

Now let’s get back to that first in-person, one-on-one interview I mentioned at the beginning. LL was in Portsmouth, Virginia, for the Kings of the Mic tour in 2013. I scored a sit-down interview with the rapper before the show. I won’t get into how I grinned from ear to ear and nearly squeezed the life out of him during a hello hug, or the fact I probably squealed at least twice. We all get star struck over someone, and for me, he was it. 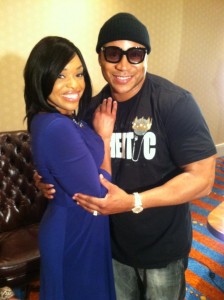 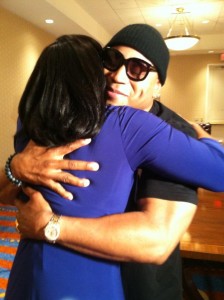 But after that initial excitement, we had an awesome, in-depth interview. We covered everything from his work on NCIS: LA, which was a great topic for me to cover since I worked for a CBS affiliate at the time. We also talked about his staying power as a rapper, his motivations in life, his love of his family and his wife’s battle with bone cancer. We covered it all. We laughed and he even rapped “I Need Love,” per my request. He didn’t rush me during our more than 15-minute interview. He seemed to enjoy our interview and he was happy to answer my questions. Before I left, he said to me, very matter of fact, “You’re going national.”
It literally took me by surprise. I told him how humbled I was to hear that from him. LL has done interviews with some of the greatest hosts and reporters in the biz. But he reiterated his statement. “You’re very good.”

I later visited the set of NCIS: LA for a behind-the-scenes segment for my job. Now, I know what you’re thinking, because it probably sounds a bit crazy at this point. This is too much of a coincidence, all these LL Cool J interviews. But I swear, I was not stalking the man! When it was time to grab a quick interview with LL between filming scenes, I asked if he remembered me. He said, “I absolutely remember you. I said you were going national. Look at you. You’re here in LA!”
Unreal. By then I was a pro at interviewing LL so there was no school girl crush antics. Just one professional working with another. But I saved that interview clip. It was a moment I would never forget but soon remember.

Of all the many celebrity interviews I’ve conducted, LL was my favorite. He seemed as honored and willing to do the interview as I was to ask the questions. That’s not the normal for folks who’ve been famous as long as LL. He’s humble, gracious and grateful. I observed that during my set visit. He is that nice to everyone, including his co-stars, the crew working hard behind the scenes and the fans who walk by. My take on it is he realizes he’s blessed and he doesn’t want to lose sight of that. He’s not too busy to appreciate the journey.

Fast forward to the moment I found out I landed a new gig, hosting a nationally syndicated morning show.  I love my job and I work with an extremely talented group. 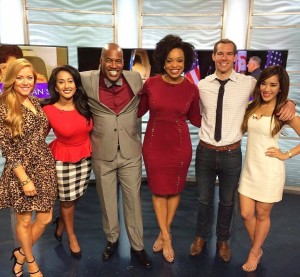 This is exactly what I prayed for and spelled out on my vision board. Yes, I have a vision board. My dreams and goals aren’t written in a diary stashed away in a messy bedroom desk drawer. They are spelled out in bold print on a vibrant poster board directly across from my bed. When I wake up each morning, and thank God for a new day of life, my health and his many blessings, I then read my vision board out loud. Daily affirmations. These are all realistic goals I hope to one day achieve. And among those goals are the words “nationally syndicated talk show host.” There are still many more goals on that vision board I hope to achieve but it’s so refreshing to see several of them come to fruition.

I sent LL a twitter message to let him know he was right:
“You said I would go national one day. I don’t know if you remember our interviews in VA and on set at NCIS: LA but starting next week, I will be a syndicated morning talk show host. Thanks for speaking blessings into my life. Keep grinding.”

I haven’t heard back but I’m sure when we cross paths again in a future interview, he will be proud. And I will let him know what it meant to have someone as accomplished as he speak favor and positive energy over my future.
I plan to never lose sight of that, and enjoy the journey as well.